Interview: Scott Snyder and Jeff Lemire Face Their Fears in “A.D.: After Death”

Like most of us humans, Scott Snyder and Jeff Lemire are pretty afraid of death.

The Portalist: I got the sense that this was a project or an idea that had been germinating in you for a while. Why was now the right time for you to tell this story, personally?

Scott Snyder: Yeah, it was actually a long time coming. About 3, almost 4 years ago I pitched the idea to Jeff, it was a short story at the time, and it was the same bones. It was basically about a cure for death that’s found, and a man who has this crippling fear of death, and it stops him from having any productive life in the present day.

I’ve always struggled a bit with depression or anxiety. And I think the topic that comes up the most when I’m not feeling well is this, where I just get paralyzed by how quickly everything goes; my kids, life, all of it. So he [Jeff] really encouraged me to expand it, he said, listen, ‘I’d like to draw it if you’ll be up for it, and would you be willing to do prose for it?’ He had read my prose from back when I was doing that before comics.

The way the book is structured is the prose tells the story from the first person narrative, of this guy Jonah Cooke, and how he becomes affiliated with this cure for death, and how his life goes over this vast span of time that leads him to the present which is 800 years in the future. And the comics part of it tells the story of how he’s kind of desperate to get out of this community where everybody lives on and on and on, and come back to the world and see what’s happened to it. It has this adventure sci-fi element where he’s coming down from  this community that’s nestled in the mountains above the clouds, after all these cataclysms, he’s coming down to see what happened.

It’s a project that I could not have done without a good friend like Jeff. It’s pretty confessional at times, and there’s also a lot of things that are embarrassing, I think, about how wrapped up in my own head I get. In some ways its the closest thing to writing a book from the couch as possible, from the therapist’s couch. And also Image was so incredibly supportive of letting the book take whatever form we thought it should take, so even something like this, where it’s sort of three 80-page books and it’s part prose and something that isn’t necessarily the most user-friendly book from first glance, they were so incredibly great to us.

Image was so supportive we figured it’d be best to give a big bunch of the proceeds from the first book to the Creators for Creators program. I’m working with Nick Dragotta and David Brothers to give them whatever they want for the proceeds from the first book to fund the second year of that program, instead of collecting everything. They’ve been such a terrific home. They just have the right spirit I think right now for the comics community.

P: I think this story stuck with me particularly in the last few weeks, given everything that’s going on. I think every generation feels it’s teetering on the edge of the end, but given the political climate and the crisis in our environment, I feel a lot of the time like oh, our species is either on its final age or else we’re about to drastically change. Is that something you feel as well?

SS: Yeah, in fact that’s in everything I’m writing lately. You’ll see in Book 2 especially it picks up those themes intensely. The guy who sort of develops the cure, he comes up in the second book, he approaches Jonah in the second section, he makes those exact arguments, which is ‘we are a species in old age.’ When you’re in old age, you’re aware of your fragility, and you act accordingly, you’re either brave or you’re terrified. And right now, we all act terrified. If you want to know what old age feels like, according to him, it’s being suddenly aware of the ends of your own body—your fingertips, your hair, you end here, and the terror that comes with that.

In some ways the stuff I’m doing on Batman [D.C. Comic’s All-Star Batman] is the exact same stuff. It’s all about Two-Face saying, he says it openly, everyone feels like the world’s ending, so everyone’s getting more selfish. And Batman argues the opposite. The subsequent stories in All-Star deal with the exact same theme; the main thrust of the entire first year was all the different villains making different variations on that argument. It’s a huge engine on that book, this completely understandable regressive reflex that we have—that I have—where we say ‘Oh my God, it’s just so scary, everything feels insurmountable, it seems so big so big and I’m so small.’ And you retreat. Whereas the heroes in the stories I’m telling in All-Star and other books, are very much the opposite. They talk about exploration and venturing into mystery and being brave, and understanding you’re a small part in a larger story and doing your best to be the best word or paragraph in that story you can be. It’s a huge battery for this story. It’s very much in the DNA.

P: Jeff, what drew you to working on this project? What made it compelling to you?

Jeff Lemire: A lot of it just comes out of our friendship and wanting to work with your friends on fun projects. We collaborated a little bit at DC when I was there, on a couple of books, other than that we’ve never fully collaborated on anything. We thought at the time it would kind of be a fun little side project that we’d do, give us a chance to work together, and as things tend to do, it got bigger and larger in scope as we got really into it. It became pretty obvious right away that this needed to be something a little bit bigger and more substantial than a side project.

And I’d only drawn stuff that I’d written for myself, I’ve never drawn anything that someone else has written, and that was also compelling to me as a challenge for myself. Working with another writer was great for me to kind of get out of my comfort zone and not just write stuff that was written to my strengths as an illustrator, and if I was going to do that I wanted to work with a writer I could trust and who I knew well. It just seemed like the right thing at the right time to try this. I’ve drawn a lot of stuff that I’ve written; this was a good chance to take a break and try something different.

P: Given the choice between dying tomorrow and being forced to live forever, and having to deal with the emotional impact of that, do you know what you would choose? Is that something you thought about while working on it?

JL: That’s almost an impossible question to answer truthfully, because I know that if I was honestly faced with that decision, the good part of my brain would be like ‘no, obviously  that would be terrible to live forever, you have to die tomorrow, as sad as it is.’ But the realistic part of me knows that how could you ever actually make that decision? I think almost all of us would choose to live forever, because we’re all so scared of dying. I know I would; I wouldn’t want to leave my family tomorrow. I would choose it and deal with it later, and then of course it would become a nightmare. It’s a tough one to answer truthfully, but I think it would be hard for anyone realistically to choose death tomorrow if they were faced with it.

P: Do you find yourself being drawn to sci-fi in general now, having worked in it before, or is it just kind of like if the story speaks to you, regardless of genre?

JL: Yeah I think it tends to be more story stuff. Sci-fi is so broad too, and there are so many sub-genres. The stuff I do in Descenders is space-bound, futuristic space opera stuff, and I feel like Sweet Tooth or A.D. is much more grounded speculative fiction. I guess in theory it’s all science fiction, but those worlds are so different from each other. Comics have always just lent itself to the fantastic, it’s just the nature of the medium, really. My indie stuff is kind of not really genre based, a little more grounded human stuff, I need that as well as a storyteller. But I always go back to the fantastic too, I just love it. I love the creative possibility of world building and not having the shackles of reality always kind of holding you back. 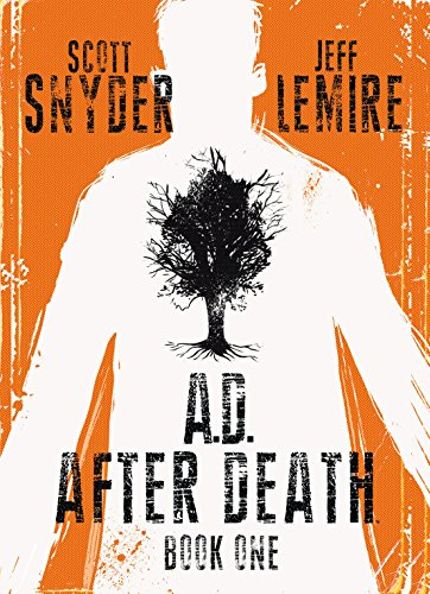