Immortality Has a Steep Price in Joe Haldeman's Buying Time

From the award-winning author of "The Forever War" comes a sci-fi mystery set in a world where death is optional—as long as you can pay.

What if money was the only thing standing in the way between you and centuries of blissful youth? In the gripping hard sci-fi novel Buying Time, from renowned author Joe Haldeman, a corporation called the Stileman Foundation has revolutionized aging. The Stileman Process is a month-long rejuvenation treatment that renews the youth and wellbeing of patients, at the staggering price tag of 1 million pounds per rejuvenation. Once the rejuvenation treatment takes place, the recipient is labeled as an "immortal."

Dallas Barr is one of the oldest men in the world, and has grown skilled at accumulating the fast cash necessary to secure a rejuvenation once every 12 years. He knows the Stileman Process can't delay the aging of the mind forever, but in the meantime, he's enjoying his youthful body and the wonders of earth and space with his lover Maria—an immortal who has decided to die in a few years rather than rejuvenate.

But when an attempt is made on Dallas' life, he begins to see a pattern in recent mysterious instances involving immortals. Someone is trying to kill Dallas and his fellow death-cheaters—and this time, all the money in the world might not save them. 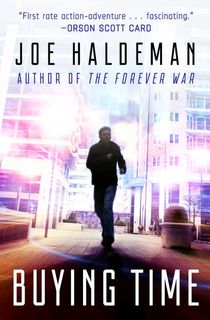 After the first hundred years, some people stop taking chances. With a new young body—or at least a healthy one—every ten or twelve years, there’s a strong temptation to go out and use it. But if you did try to occupy centuries climbing mountains, skin diving, abseiling, and so forth, sooner or later the force of statistics would catch up with you. The Stileman Clinics will cleanse you of cancer and sclerosis and make your vital organs and muscle and bone think they’re brand-new again—but lose a wing in a sudden storm and you’re as dead as any mortal. Any “ephemeral.”

Dallas Barr had ignored this reality for almost a century. He had sailed around the world in a forty-foot sloop, had braved vicious currents to swim the lonely corridors of the Titanic, had come to terms with himself in a winterlong Antarctic vigil. On the Moon he had climbed the Straight Wall and tramped the Plato desert in search of fairy lights. He’d bought his way onto the first team to climb Olympus Mons, on Mars. Then just before his ninth rejuvenation he had been rappeling down an easy cliff in Australia’s Blue Mountains when a foolproof rope snapped to give him three seconds of weightlessness and then a broken back.

That almost killed him, twice. It’s hard to amass a fortune immobilized inside a body cast and either distracted by constant pain or dulled by analgesia. The ninth fortune is easier than the first, though, and a person without a knack for making money has to get used to the idea of growing old.

Want more Joe Haldeman? Sign up for The Portalist's newsletter, and get the best in sci-fi delivered straight to your inbox.

(Lord Stileman himself had lived only to a hundred and five, dying in the fiery wreckage of an antique racing car. By then his clinics already were the second-wealthiest foundation in the world and only a few years away from first place.)

The only people who got immortality for free were King Richard, a few politicians and administrators, and about a hundred medical people, each of whom guarded one part of the complicated secret that was the Stileman Process. Everyone else bought the next dozen years on the same terms: all your worldly goods signed over to the foundation. And don’t even reach for your checkbook if you have less than a million pounds.

Your perennial million pounds didn’t buy true immortality, not in the absolute sense. The Stileman Regeneration Clinics could slow down the decay of brain tissue, but couldn’t stop it altogether. Nobody had lived long enough to put it to the test, but from the clinics’ extrapolations, it looked as if the upper limit would be less than a thousand years. Sooner or later your brain would fog up, and when your time came around, you wouldn’t be able to find a million pounds. You would grow old and die.

Dallas Barr didn’t spend much time mulling over that, even though he’d been in the first Stileman group and was therefore one of the oldest people in the world. Tightrope walkers don’t worry about distance records.

When he’d hurtled down the side of that cliff, Dallas had been in the ninth year of his current rejuvenation. A disastrous poker game in Adelaide, which he’d hoped would put him over the million-pound mark, had left him with less than fifty thousand Australian dollars. He had about two years to multiply that by sixty.

Most of the people he dealt with over the next eighteen months did not know him as Dallas Barr, the rather conspicuous American playboy. Many of them did not know he was an immortal. He had a number of personas scattered around the world, most with impeccable credit references, even if they were currently short of liquid assets. He vouched for himself and then at usurious rates lent himself borrowed money, some of which was invested quietly, some conspicuously, weaving a complex skein of notes and handshakes and whispered confidences that eventually, inevitably, began to generate real money. He made his million and put it in a safe place and then spent a couple of months ensuring discreetly that when Dallas Barr walked out of that clinic young again and nearly flat broke, he wouldn’t stay broke for long.

He did decide to be Dallas Barr a third time, though it meant public immortality. (He had been public once before, as Georges Andric, who “died” attempting to scale Everest alone.) The notoriety was sometimes pleasant and always profitable, though it involved some risk. Despite all the evidence to the contrary, there were people who thought the Stileman immortals made up an underground cabal that ruled the world. There were no statistics—if the clinics kept records, they didn’t release them—but it seemed likely that the second most frequent cause of death among immortals was assassination, usually spectacular, by some crazy who thought he was saving the world from a conspiracy.

No immortal ever remembered exactly what happened during the month of rejuvenation therapy. This was for sanity more than security. The first three weeks were sustained agony, beyond imagination, being pulled apart and put back together; the last week was sleep and forgetting. When he left the Sydney clinic this ninth time Dallas Barr felt, as always, renewed but deeply rattled: a strong man of a hundred and thirty who couldn’t remember the nine times he had begged for the release of death.

Want more Joe Haldeman? Sign up for The Portalist's newsletter, and get the best sci-fi delivered straight to your inbox.