Whether humanity is finally felled by a zombie apocalypse, a nuclear disaster, or a Day After Tomorrow-type situation, we’re all going to need some hard-core survival skills to weather society’s collapse.

Full of wilderness skills that will prove useful even if the four horsemen don’t make an appearance soon, and fascinating information about the actual precautions already in place across the globe in case of complete and total meltdown, How to Survive the End of the World just might save your life. Provided, that is, you’re willing to eat some bugs.

Read on for an excerpt and download the full book on Amazon, Barnes & Noble, and iTunes. 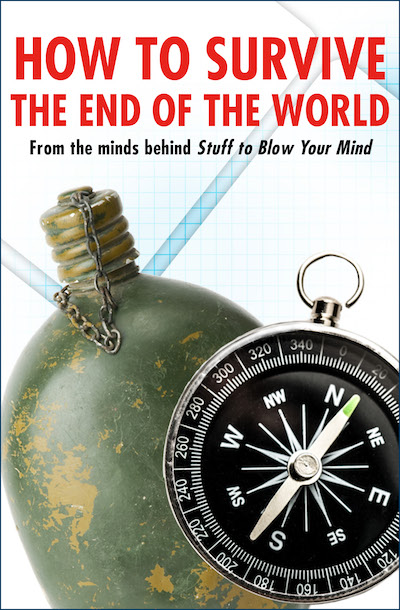 What if your only food source was crawling underfoot? That’s right—bugs. It may not be a gourmand’s preference, but now isn’t the time to get picky—it’s a matter of life or death. Maybe you should pull up that rotten log and chow down on some termites. That would be an excellent plan—termites are loaded with protein and the second most eaten insect on Earth. Or perhaps dig for some worms—they have plenty of protein, and these squiggly fellows can be downed raw or cooked.

The practice is called entomophagy. Chimpanzees, aardvarks, bears, moles, shrews, and bats are just a few mammals aside from humans that eat insects. Many insects eat other insects—they’re known as assassin or ambush bugs. Some even go Hannibal Lecter on their own kind. Insects are high in nutritional value, low in fat, and inexpensive. So why do Americans and Europeans go out of their way to avoid eating them—even going so far as to spray their fruits and vegetables with dangerous pesticides? It’s just a cultural taboo.

The history of entomophagy is rich and full of, well, bugs. As man evolved from ape, the hunters and “gatherers collected more than edible plants. They set their sights on insects. They were everywhere, and other animals ate them, so why not? In fact, these early humans probably took their cues on which ones were tasty by observing the animals in the area. Years later, the Romans and Greeks would dine on beetle larvae and locusts. Greek scientist and philosopher Aristotle even wrote about harvesting tasty cicadas.

RELATED: Want to win a survival prize back? Enter our Humans, Bow Down giveaway.

Locusts were a nutritious, cheap “and plentiful food source for ancient Algerians. They’d collect them by the thousands and prepare them by boiling them in saltwater and drying them in the sun. Australian Aborigines made meals of moths but proved picky in the preparation. After cooking them in sand, they burned off the wings and legs and sifted the moth through a net to remove the head, leaving nothing but delectable moth meat. The Aborigines were, and continue to be, entomophagists. They eat honey pot ants and witchety grubs—the larvae of the moths. These grubs can be eaten raw, and when cooked taste like roasted almonds. Or so they say.

Today, most cultures around the globe feast on insects. There are 1,417 species of edible insects and nearly 3,000 ethnic groups that currently practice entomophagy around the world. Most of these insects are eaten in the larval and pupal stages, though some are good all the way into adulthood. Topping the list of edibles is the beetle, with 344 varieties to choose from for dinner. Ants, bees, and wasps are close behind with 314. Butterflies, moths, grasshoppers, and crickets are the other heavy hitters.

So who’s doing all of this bug-eating? Asians lead the way. All over Asia, moth larvae, crickets, moth pupae, beetles, and dragonflies are eaten. Crickets are dry-roasted for snacking or cooked into rice. The larvae are added to soups, stews, and stir-fried meals. The Japanese consider the silk moth pupae a delicacy. But none of these hold a candle to the giant water bug. This critter is a favorite in Asia. It can be roasted and eaten whole or ground into a paste for sauces.

Africans also enjoy the crickets and grasshoppers, but mix things up a little by eating termites and caterpillars, too. Things get a little wacky in South America. Here, arthropods are often found on the menu. “Scorpions and even tarantulas are cooked and eaten with regularity. Tarantulas are said to be a little on the greasy side, and the taste often leaves brave westerners with a loss for words. Peter Menzel, author of Man Eating Bugs describes it this way: “If day-old chickens had no bones, had hair instead of feathers, and were the size of newborn sparrow, they might taste like tarantulas.” Not exactly a ringing endorsement.

The fact that most Americans and Europeans might find eating arthropods gross is due to cultural bias and history. Once farming and raising animals for consumption became the norm, insects became the enemy. After all these years of trying to get rid of insects, it’s hard to turn around and consider them food. There’s also a bit of hypocrisy going on here. Lobsters and crabs are both crustaceans, but they’re prized as expensive seafood instead of an odd delicacy like their spider relatives. Most insects are much cleaner than lobsters and crabs, too. Their diet of clean grass sets them apart from these oceanic vacuum cleaners that eat whatever refuse they can scavenge from the ocean’s floor.

The benefits of consuming insects are multifold, starting with “the fact that they’re good for you. Consider the following: 100 grams of crickets contains 121 calories. Only 49.5 calories come from fat. Where you really see the nutritional value is in the 12.9 grams of protein and 75.8 milligrams of iron. They also have about 5 grams of carbohydrates. If you’re watching your figure and want to cut down on the carbs, go with a silk worm pupae or a nice steaming bowl of termites. Neither of these has any carbohydrates, and they’re both great sources of protein and calories. But if it’s protein you seek, look no further than the caterpillar. These little fellows pack a walloping 28 grams of protein per 100 grams. They’re also loaded with iron, thiamine, and niacin. You may know those last two by their more common names—vitamins B1 and B3.

Compare the nutritional value of insects to beef and even fish and it’s pretty clear which one is the smart food. While having protein levels on par with caterpillars, lean ground beef and cod come up short in iron and vitamin levels. Crickets also contain a lot of calcium, which we know is good for bone development. Besides nutritional value, insects are also abundant and environmentally sustainable. Farming and harvesting insects takes very little water and transport fuel compared to livestock, grains, and even vegetables. It’s also more efficient than raising cattle. One hundred pounds of feed produces 10 pounds of beef. The same amount of feed would produce more than four times that amount in crickets. And, if you are in a survival situation, they are far lighter weight to carry with you.

So, how do you tell which bugs are edible and which are poisonous? Most insects are edible. Unfortunately, there isn’t a dead giveaway to tell if a bug is edible unless you know what you’re doing. However, there are some general guidelines you can use to help you decide. One rule of thumb that survival experts endorse is to steer clear of brightly colored insects. Like on amphibians, bright colors are usually an insect’s way of saying, “Avoid me, please.” You should heed their advice. Insects that are extremely pungent are also good to keep off your plate. Some wilderness experts will caution against hairy critters as well as bugs that bite or sting. Disease carriers like flies, ticks, and mosquitoes are also on the no list.

RELATED: 5 Likely Ways the Apocalypse Could Happen, According to Science

Want more apocalyptic books? Sign up for The Portalist’s newsletter, and get our recommended reads delivered straight to your inbox.