Author Kendare Blake on Why Horror Seems to Follow Her

Young adult author Kendare Blake isn’t afraid to tackle horrific themes—in fact, she’s drawn to them. Blake has won fans over with her tales of the macabre. Her popular horror romance book Anna Dressed in Blood is currently being adapted for the big screen by Stephanie Meyers, and her latest book takes an uncompromisingly dark look at a fantasy world.

Three Dark Crowns is the first in a two-part YA fantasy series that tells the story of three triplet queens destined to destroy each other in order for one to claim the crown. Separated when they were young, each has a gift—Mirabella, the elemental; Katharine, the poisoner; and, Arsinoe, the naturalist—that they have spent the past 10 years cultivating in hopes of destroying each other in the year after they turn 16.

The Portalist caught up with the passionate author about her new dark fantasy novel; her love of Stephen King (and his son, Joe Hill); and the ghostly visits she sometimes gets at 3:00 A.M.

PORTALIST: Three Dark Crowns was just released, and there’s going to be more in the series, right?

KENDARE BLAKE: It’s a duo, but it’s expandable. The story that is in Three Dark Crowns will wrap up in the next book, but there’s more world; there’s more history. Even a few years after this particular story of these queens wraps up, there’s still more of that to tell.

P: The story follows three triplets who are forced to fight against each other. So it’s three very different personalities you had to write in this book. Do you feel like you relate to one over the other?

KB: I thought I would. The sisters are triplets. So you have an older triplet, Mirabella, she’s an elemental—very strong, favored to win because she’s been raised by the Temple (which is the ruling religion). She can control all the elements, which is unheard of—even for a queen. Usually they’re only strong in one. So she’s like the golden child.

And I thought, well, “I probably won’t like that girl—she’s too perfect!” But the thing about Mirabella is she’s really good-hearted, and she just wants to do her duty to the island. She sees killing her sisters as a necessary evil—she does not want to do it. And really, she’s the one who balks the most at it, because she actually remembers them when they were children, when they were raised together until they were six. The other queens don’t remember that. But she’s like, “I remember you when you were kids, and I loved you, and I don’t want to do it.” So, Mirabella—I sympathize with her a lot. I felt very bad for her.

Katharine is raised by the poisoners: She’s the youngest triplet. She’s very weak and extremely abused. Even though they’re abusing her in the hope of making her stronger, it’s still a very abusive situation. They’re constantly poisoning her, and since she has no poison gift, it’s hard. She’s covered in scabs, she’s always vomiting, she’s extremely skinny […], and she’s smaller—because it’s stunted her growth, all these years of poisoning. I knew that I would sympathize with her a lot, just because her situation is rough. And yet, as Katharine comes into her own, I’m like: “Hell, she don’t need me. She is fine.”

Arsinoe is the naturalist—she’s supposed to be able to bloom roses and make the crops go. A queen is supposed to have a really strong familiar, which is a companion animal who kind of knows your emotions and thoughts and you know theirs, but Arsinoe hasn’t been able to cull hers yet. Much like Katharine, her gift is very weak. She’s like the hard underdog, so I really thought I was going to go with her. Plus, I just like those animals. 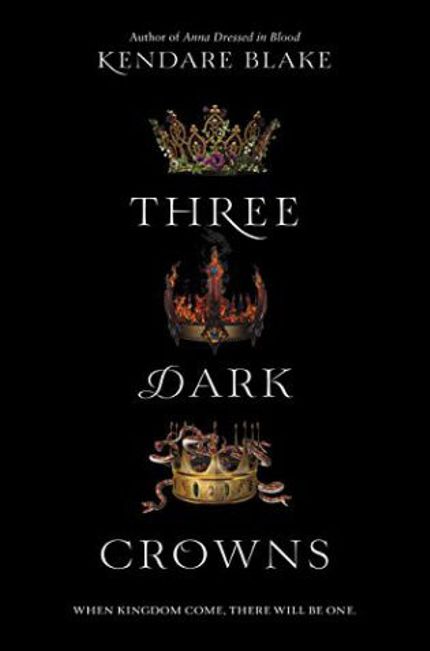 P: It’d be cool to communicate with the animals.

KB: Right? Like her best friend Jules has a cougar—I want that. I would love to have a cougar! But, as I wrote it, they all carry themselves, and they each carry their arc, and I never found a favorite.

P: Okay, so they can all do it on their own?

KB: Right, and actually what I’m finding from readers is that there is no favorite. Either, they like them all, they hate them all, or they choose a queen, but nobody seems to be choosing the same one.

P: Well that means you wrote it equally then. I think that’s great, because in a book that has three obvious main characters, if one were more popular than the other then they wouldn’t really be three main characters anymore.

And I think whomever you end up aligning yourself with—it’s almost like a personality test. So people will tell me, “I like Katharine, the poisoner, best,” I’m like, “Ah, I see that about you. I know something about you now.”

P: You said that in the sequel, things are going to be tied up. But do you think you will continue on?

KB: I think so, but it won’t be direct. It won’t be a trilogy. This would be a companion novel—a continuation. A trilogy to me is one story broken up into three books. It’s the same story, one arc that goes over. This would be like something else is happening with some of the same characters. […] I would love to tell a story about one of the queens from the past.

P: While, of course, Three Dark Crowns is a YA fantasy novel, it’s also very dark. Coming off of Anna Dressed in Blood, is that something you knew you wanted to do next? Did you want it to be dark? Or did it just happen that way?

KB: You know, it seems the only stories that ever come to me…that’s the consistent theme. There’s always some aspect of disturbing, darkness to it. Even the Goddess War [series]—I thought of it as more of an adventure quest story, but there was still the fact that they were all dying in these gruesome, body-horror kinds of ways. I just can’t get away from it. I don’t know why, I had a really nice upbringing—I’m not, like, troubled. But I think it’s kind of like what Stephen King says, “Horror writers are actually very nice people because we take it all out on paper.”

I also read a lot of dark stuff as a kid.  Young adult is a relatively new phenomenon—we didn’t have it. So I jumped straight from chapter books into adult books, and the first real novel that I read was Stephen King’s Gerald’s Game when I was 10 years old. So the one about sex games gone wrong was the one I started with. And I just devoured every Stephen King after that, and then moved on to Anne Rice, moved on to Brett Easton Ellis with American Psycho—way too young.

KB: I haven’t read him in years. I did read Doctor Sleep because it’s The Shining 2, how can you not read Doctor Sleep? But I like Joe Hill, his son. Twentieth Century Ghost is probably one of the best collections I’ve read in the last 10 years—oh my God! And N0S4A2 felt like an homage to his father. He’s so imaginative, and so Kingy. And I felt like that was the first book where he embraced his Kingy-ness.

P: Do you think that there will be a third Anna book?

KB: It’s still the question I get asked the most, especially with the movie.

So far he has not shown up with a story. About three years ago, I was on vacation in Paris, and I thought I heard him. [At] 3:00 A.M. every morning, like devil’s hour, I would wake straight up, and I thought I heard him, like, “Oh my god: You want to tell me a demon story, don’t you?” […] And I waited and waited and waited to see, and he never said anything else. So, either that was just a complete false start, or he died.

P: I’ve read on your site before that you read your own reviews. Is there a reason for that? Or is it just kind of unavoidable?

KB: You know that line from Brokeback Mountain: “I wish I could quit you?” Reviews are my Jack. They are. I can’t stop—it’s a compulsion. For one thing, I love to see what readers are being affected by, and what they’re responding to. And when you read a review where it’s like: “Oh my god, you and I read the same book,” because it’s so rare. Like, you and I will read a book, and it will not be the same book to each of us. But sometimes you read that review, and you’re like: “Hey! We both read the same book.” And that’s really special.

But also, I will read the one star reviews. I will read the completely negative, hateful reviews. And, I’m not going to lie: They do hurt my feelings for like five seconds—it’s natural. But I read them because I want to see: “Okay, is this a valid point?” And to them, yes it is.

Are any of these reviews right or wrong? No, they’re all right as far of their reading experience goes. Plus, some of those one star reviews are funny—funny as shit. The ones that use the GIFs, I love them! Even though they’re about my book. If you’re going to criticize at least make it witty.

P: At least you can find the humor in it! I’m sure you know, all authors get one star reviews. Not everyone likes the same thing, and it’s just part of the process.

KB: Every reading experience is subjective. I will read books, and I just know I wasn’t in the mood for it, or it just wasn’t for me. Or I just hate it with a steaming passion. But I also know that lots and lots of other people absolutely adored it; so for me that might not have been a good book, but that doesn’t mean it’s not a good book.