[CLOSED] Win Season One of A Discovery of Witches on DVD/Blu-ray!

'Tis the season of ghosts and ghouls—which means it's the perfect time to binge-watch one of our favorite gothic fantasies, A Discovery of Witches. Based on Deborah Harkness's bestseller, the hit show follows historian and reluctant witch Diana Bishop (Teresa Palmer), who has cast aside her ties to a famed sorceress of Salem. But when she stumbles upon an enchanted manuscript at the Bodleian Library, her hard-won "normal" life becomes anything but. The creatures of the underworld are abuzz with talk of Diana's discovery, and only she can stand between its secrets and the wrong hands. With an interspecies war looming on the horizon, Diana must team up with centuries-old vampire Matthew Clairmont (Matthew Goode) to protect the book, understand its mysteries, and become the witch she was always meant to be.

We've partnered with Acorn to give 5 lucky winners the first season of A Discovery of Witches on DVD/Blu-ray! Enter below for your chance to win . . . and catch up on all the romance, magic, and intrigue before season two premieres next year.

Enter your email for your chance to win!

By entering your email address, you agree to receive emails from The Portalist and Acorn. 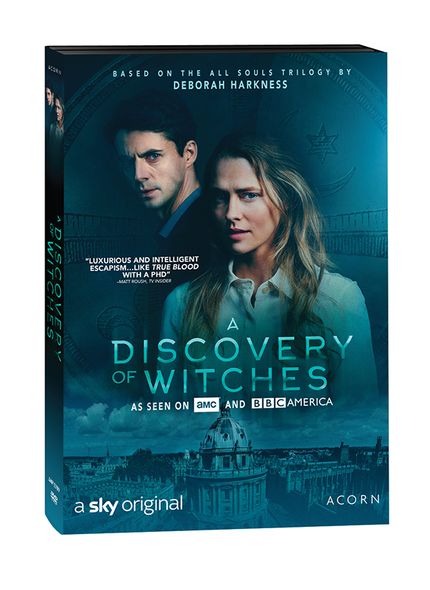 A Discovery of Witches: Season One

Adapted from Deborah Harkness’s bestselling trilogy of novels, this romantic thriller series is “pure catnip for fans of this genre” (TVGuide.com).

Brilliant historian Diana Bishop (Teresa Palmer, Hacksaw Ridge, Warm Bodies) is a witch denying her heritage . . . But when she unexpectedly calls up an ancient, bewitched manuscript from Oxford’s Bodleian Library, she finds herself thrown into the heart of a dangerous mystery—and into the path of enigmatic geneticist and vampire Matthew Clairmont (Matthew Goode, Downton Abbey, The Crown). Matthew is driven to solve the looming threat of magical creatures’ decline and believes that the lost manuscript could answer the mysteries of their existence. Their unlikely alliance to find the book before it falls into the wrong hands—and their deepening relationship—threatens to violate age-old taboos and shake the fragile peace that exists between the species.

A Discovery of Witches: Season One

Note: The sweepstakes is open to all legal residents of the 50 United States and Washington, DC who are 18 years of age and older by October 25, 2019.

Featured still from A Discovery of Witches via Sky Productions